We are proud to join the What's Neat show as a sponsor, and support Ken Patterson and the rest of the team as they continue to produce interesting and informative content for the model railroading community.

Take a look at this week's segment on the UWT-100 Universal WiFi Throttle. James Regier discusses the ease of consisting with our throttle compared to other systems, and the compatibility of the UWT-100 with NCE systems, Digitrax systems, and more. Segment begins at 18:00.

The article below is reproduced from Rapido Newsletter Vol. 122, released Friday, March 13. We are very excited to be working with Rapido Trains and look forward to many successful collaborations!  - Stephen 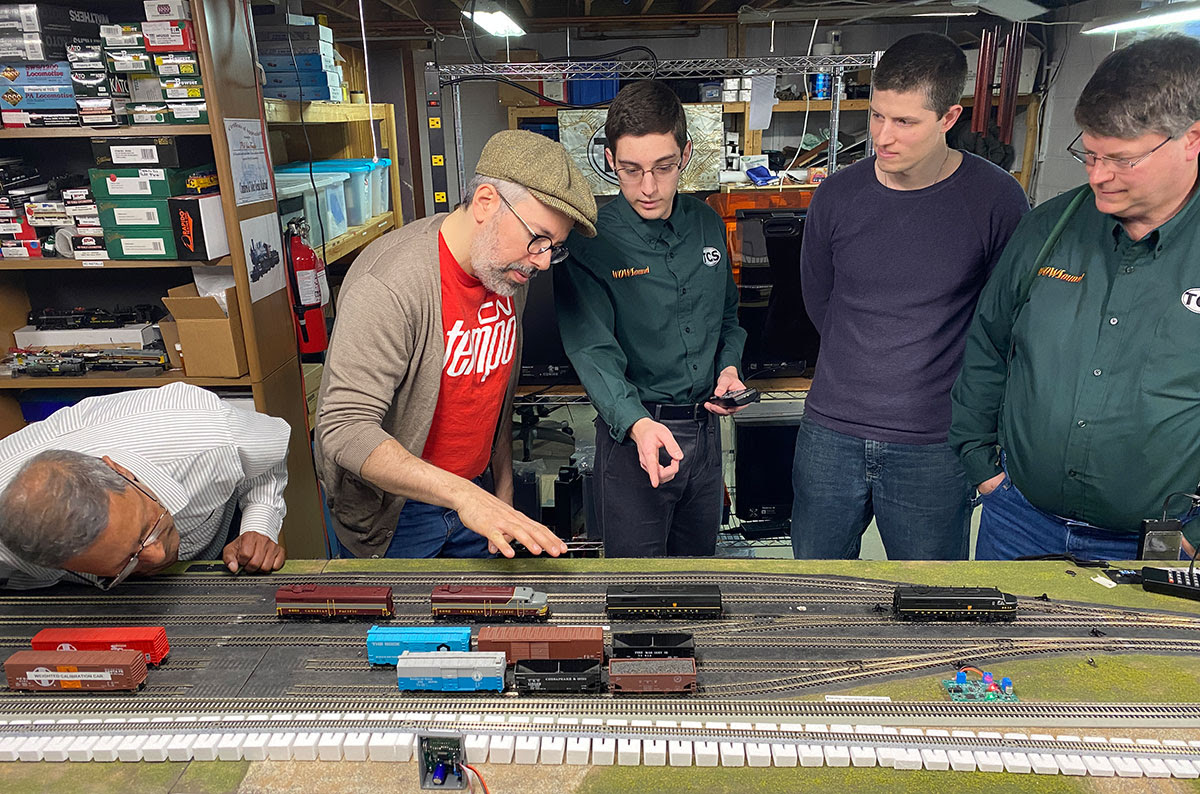 Mohan and I are getting the lowdown on the first draft of the Rapido-TCS decoder installed in a Pennsy FB-2.
TCS crew are (from left): Dan Mycio, John D. Forsythe and John Forsythe.

Earlier I mentioned Rapido-TCS decoders in the HO scale M420. I'd like to tell you more about this new collaboration.

We feel it is best to have more than one decoder supplier, and we've been very impressed with the folks at Train Control Systems. Our main concern with having two suppliers is that we want our locomotives to work well together. So we have been working with TCS to create a custom Rapido-TCS decoder that is fully compatible with our ESU LokSound-equipped locomotives. We are continuing to use ESU for many of our locomotive projects, and we want you to feel confident running your different Rapido engines together.

Please note that the Rapido-TCS decoder is not a WOWSound decoder. It is a new collaborative product. 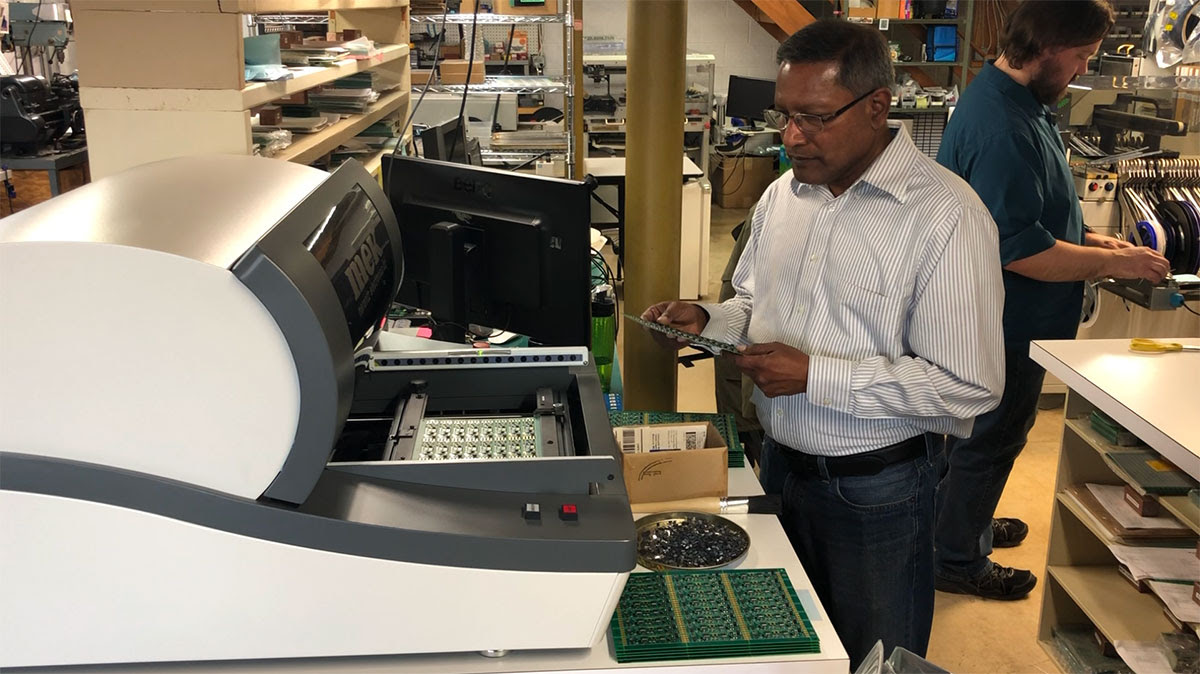 Mohan checks out the Quality Control camera at TCS headquarters. Inspecting the decoder circuit
boards manually used to take half an hour. Now it takes less than a minute.

TCS is a family business and their decoders are all made in-house in the USA. This month we visited their shop in Pennsylvania and we'll be posting a video in the next few days. The video will show the TCS operation as well as how our ESU-equipped and TCS-equipped engines can play nicely together. The vibe at TCS is almost exactly the same as the vibe at Rapido – you can tell these guys really love what they are doing. 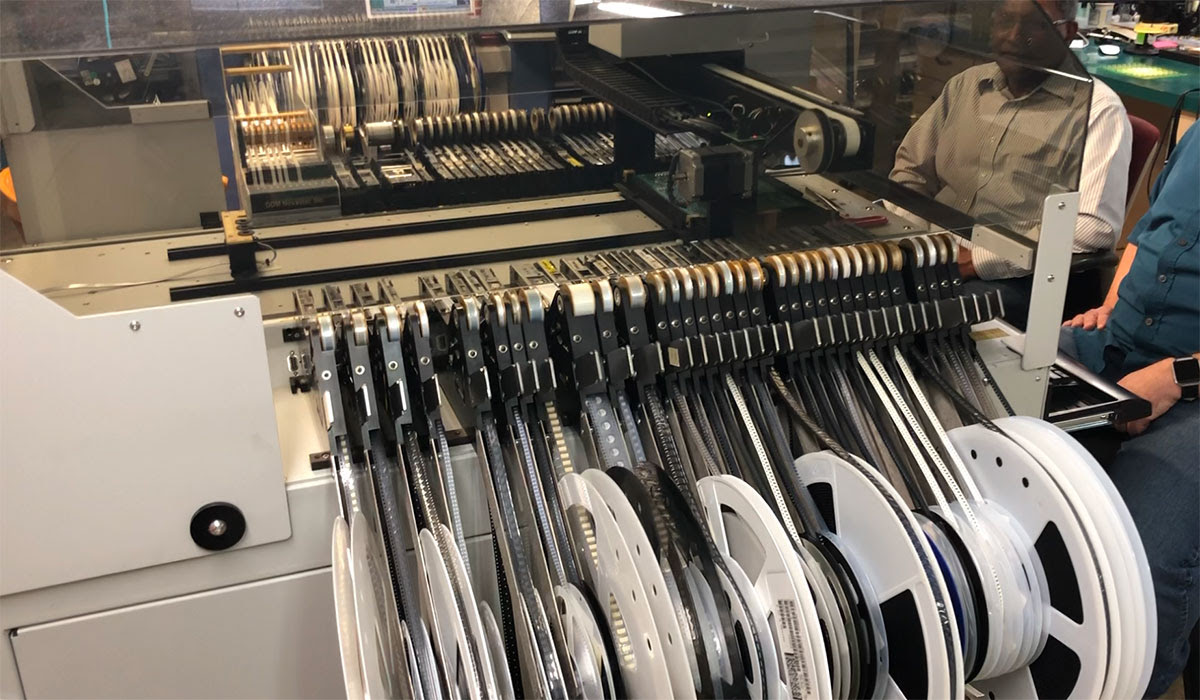 Mohan is entranced by one of the TCS Pick And Place machines. This creates the decoders while you watch. It's really neat!

TCS now has a wi-fi compatible throttle (also made in the USA) which was a joy to use, and they have almost finished the development of a TCS Desktop Programmer which does exactly what it says on the box: it will allow you to connect your PC to your track and customize the programming of your locomotives with easy-to-use software. It's also universal and can adjust the settings of all of your DCC-equipped locomotives. The programmers should hit store shelves around the same time as our M420.

Rapido-TCS decoders will all have Keep Alive® and will incorporate many of the other proprietary TCS features as options.

Perhaps you find yourself asking "How in the world am I supposed to attach the lanyard to my new UWT-100?"

You're not alone. We hear you. And we made a video to answer this burning question.

Here's what customers are saying about the UWT-100 Universal WiFi Throttle!

"This is now my favorite throttle. By far. It just works, and very well. User interface mostly clear, so much so I still have not read the instructions." - MM

"Just received my UWT-100. Put the batteries in and easily connected to my Digitrax LNWI. These two were meant for each other.  Really, really nice, intuitive, and easy to use. I didn’t even need to look at a tutorial for this. Onboard help is nice. So much easier than the Digitrax, NCE Powercab, and ESU CabControl. Much easier and faster to get up and running than connecting an iOS or Android to the LNWI. Faster start-up than an ESU CabControl. I don’t want to mess with powering up a computer and running JMRI to get the UWT-100 to connect to my Powercab or CabControl. Kudos to TCS for making this." - ME

"Just received my pre-ordered throttle. It is great! Well done! Running trains in five minutes.
The throttle fits my hand perfectly and one-handed eyes-free operation is nearly intuitive. Menu operation is fast and clear making it easy to explore and fine-tune. In my opinion, this has every other throttle beat. It does what is needed cleanly and efficiently. Thank you for such a good job!" - RR

"I finally had time to sit down and try mine. It worked perfectly right out of the box. I love this throttle! It's easy to see all of the time and effort that went into producing these throttles. It's such an incredibly polished product." - JE

"I received my UWT-100 Throttle today. Got it set up on my Digitrax LNWI. It works great and is easy to set up and use. Much better than using my phone." - DB

"I received my UWT-100 today.  It took me longer to get my computer started than it did to get started using the throttle. I'm using it with Digitrax DSC50, Locobuffer-USB and JMRI. So far I am impressed. It feels nice in hand and I don't have to worry about accidentally touching the screen (smartphone). I agree that it is a bit expensive but I think it is well worth the price. It has a very intuitive interface. I never looked at the manual." - KM

"Must say I have been very pleased with the ease of using this throttle in general and the intelligent consisting programmed into it. Picking up and dropping locomotives, even changing cabs is a cinch." - JR

Ready to learn more? Head to our Videos section to see the UWT-100 in action. If you're curious to give the Universal WiFi Throttle a try, head to our shop to pick one up for yourself.

TCS is launching an online documentation platform! The TCS Documentation Wiki (https://docs.tcsdcc.com) is an online encyclopedia that we will be populating with technical content, tips, and resources for TCS decoders, accessories, and throttles.
We will be continuously expanding on topics until we have complied a comprehensive knowledge base that is accessible to everyone and always up-to-date.
While we're busy moving our existing documentation to the wiki, we're also looking for suggestions on new articles and content that our users would find helpful. Please feel free to send us your suggestions!
Curious? Head to docs.tcsdcc.com and browse around! We recommend starting with our UWT-100 throttle article.